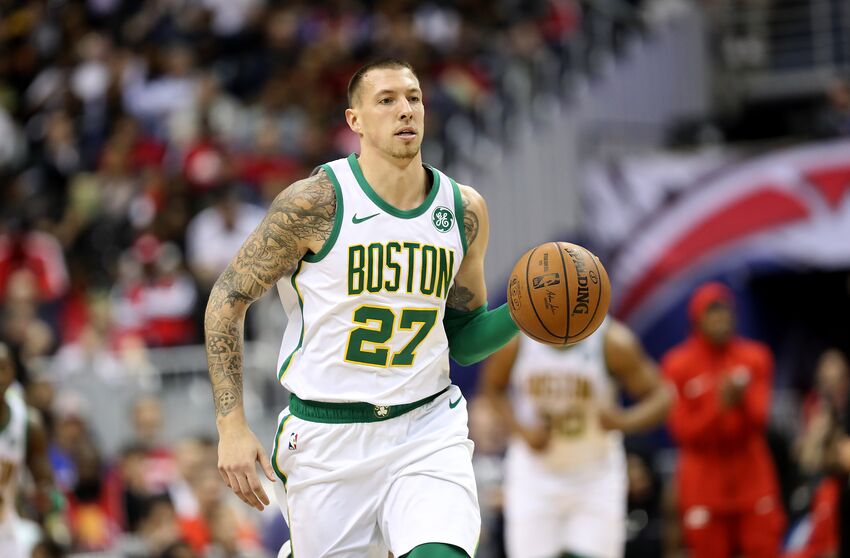 WASHINGTON, DC - APRIL 09: Daniel Theis #27 of the Boston Celtics dribbles the ball against the Washington Wizards in the second half at Capital One Arena on April 09, 2019 in Washington, DC. NOTE TO USER: User expressly acknowledges and agrees that, by downloading and or using this photograph, User is consenting to the terms and conditions of the Getty Images License Agreement. (Photo by Rob Carr/Getty Images)

He may not be a household name, but Daniel Theis of the Boston Celtics is quietly been a major contributor in the NBA season’s early going.

There are many reasons for the strong start to the 2019-20 season for the Boston Celtics. There’s the exciting play and scoring of Jaylen Brown, Jayson Tatum, and Kemba Walker. There’s the defense and leadership of Marcus Smart. And there’s the 9-0 record the Celtics have put up at home.

If there is one player flying under the radar — though certainly not completely unnoticed — it’s Daniel Theis.

Theis is in his third season in the league. Many were surprised to see him return to Celtic green in 2019, even though he had many bright spots in his first two seasons with Boston.

We’d seen glimpses of his play, brief spurts in which Theis was a major part of a victory. With so much talent in front of him, however, these instances often only occurred when injuries to others forced him into action.

Now, given the chance to shine, Daniel Theis is producing on a consistent basis. He has the ability to extend the floor and has the type of acumen and hustle coaches love. It should come as no surprise Theis is showing up with good results now that he’s seeing more minutes on the floor.

Daniel Theis has played in 18 of Boston’s 21 games this season, starting in 17. Even being a bit undersized for a big man, at 6’8 Theis has proven to be fully capable of getting the job done on both ends of the court.

He is averaging just over 21 minutes per game, part of a rotation of big men for the Boston Celtics. Enes Kanter and Robert Williams are also providing valuable minutes and Grant Williams has also put in quality time. This rotation allows each to expend energy in bursts, with Theis mostly playing in the first and third quarters.

Theis scored all seven of his points in the first quarter of last night’s victory over the Denver Nuggets. That’s right around his season average of 6.6 ppg. Encouraging was that fact he hit three of his four shots and his now shooting 50 percent from the field.

One of those made shots was a three-pointer, just his second on the season. Hopefully this a good sign, considering he knocked down 38.8 percent of his threes in 2018-19.

Daniel Theis is also pulling down 6.7 rebounds per game and his 28 blocked shots rank him 18th in the NBA.

Playing 20-25 minutes per game is a good fit right now for Theis. The rotation is working for head coach Brad Stevens and the Celtics at the moment. It will be interesting to see how this changes as Kanter continues to become more familiar with the offense.

For now, though, Daniel Theis is the man in the middle. And if he continues to play well, offering protection in the middle and contributing on offense as needed, then Theis should hold a firm spot on the center position for the foreseeable future.